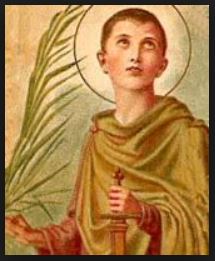 Saint Pancras, a fourteen-year-old orphan, lived in the late third century. He was not a native of Rome. He was brought there by his uncle who looked after him. Pancras became a follower of Jesus and was baptised. Although just a boy, he was arrested for being a Christian during the reign of the emperor Diocletian. Pancras refused to give up his faith. For that, he was sentenced to death and was beheaded. He became a very popular martyr in the early Church. People admired him for being so young and so brave. In 514, a large church was built in Rome to honor him. In 596, the famous missionary, St. Augustine of Canterbury, went to bring the Christian faith to England. He named his first church there after St. Pancras.

St. Pancras and the other martyrs we remember today remind us of the importance of our Catholic faith. It should mean as much to us as it did to each of them. If we need to grow stronger in our faith, let’s ask St. Pancras to help us.

St. Pancras pray for us.